Welcome to the Race Across America Time Station 42.

Have yourself some HOT coffee and some of Amy's Famous Cookies 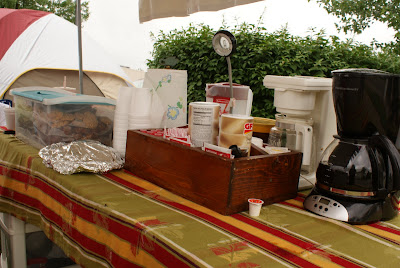 We received these shirts from the race headquarters this year for our outstanding service to the racers. There are 55 times stations across the states and we are voted one of the best. How do we know this..cause racers, crews and official tell us. The only other one that sometimes beats us out is the one in Arizona.. they have a pool. After riding in the heat and sand storms and heat they really like their pool. Clothes and all. or not. Bikers will get off the bike and flop in the pool. We are voted best because of our crowds. We always have a crowd. Now in the middle of the night from 4-7am there may be only one person but all other times we 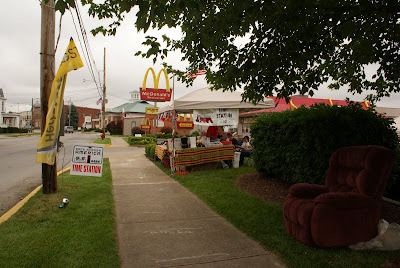 We have a flag for every country racing. 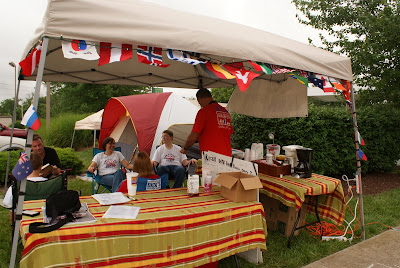 This is Gerhard Gulewicz's team pulling in. He came in 2nd in 2011 after Jure Robic..rip. But this year he just couldn't do it. He dropped out after passing our TS. 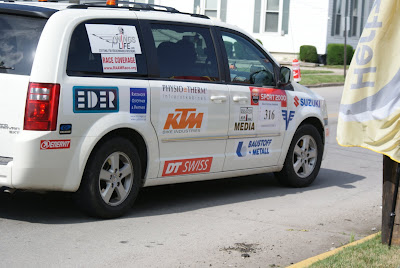 So racers have bare crews, some have their own media crews, doctors, massage therapist, nutrionist etc. You name it they have it. 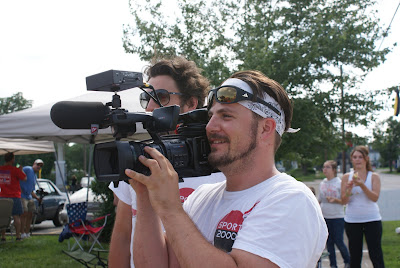 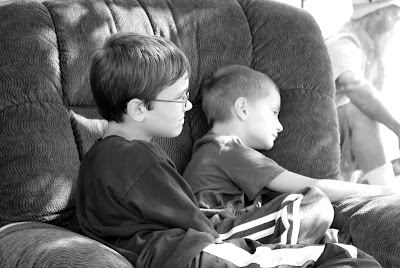 Someone must be coming cause they have moved to the sidewalk.. 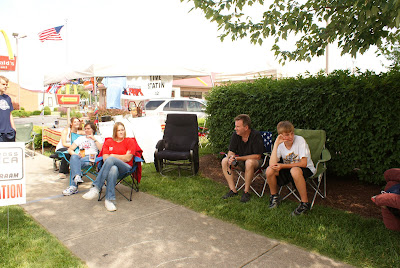 Other times it looks like this. Checking updates.. tweets..texts..Facebook and what great shots he got. 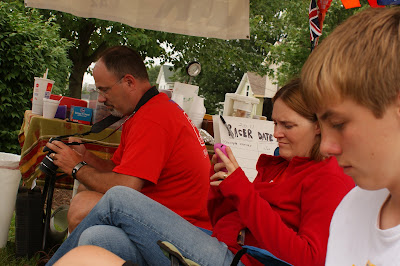 Now this is Alberto Blanco. He was suspended from the Tour for allegations of drug use. He cannot ride for 2 years so he decided to join the RAAM adventure. 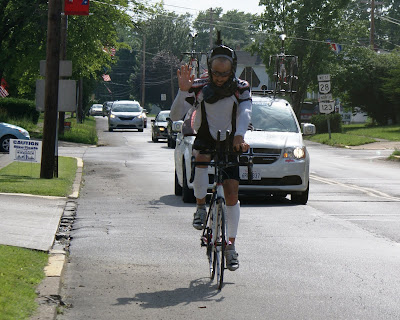 and this is called the Shermer Neck look. Racers get to the point they cannot hold their own heads up. Soooo. their crew fabricate contraptions to do so. 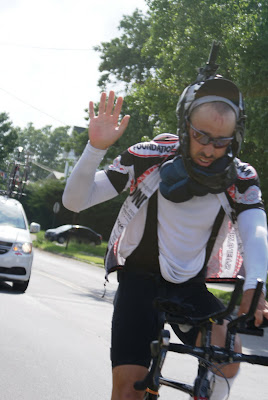 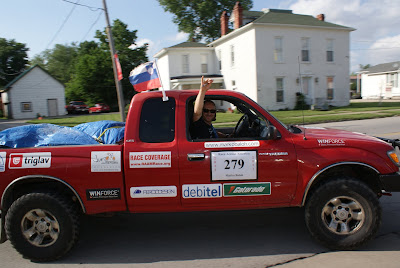 Gerhard Gulewicz from Austria arrives. He is the riders that requests Amy's cookies. #2-5 racers were very close so he didn't stop but we made sure his crew had is go bag for him later. 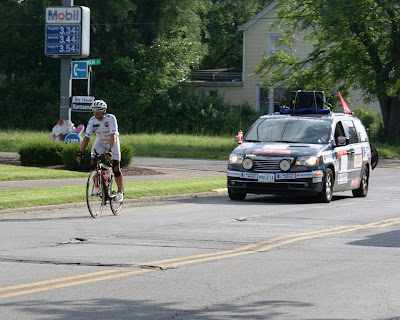 This is Marko Baloh's wife on the left. He is the
world record holder is several events. 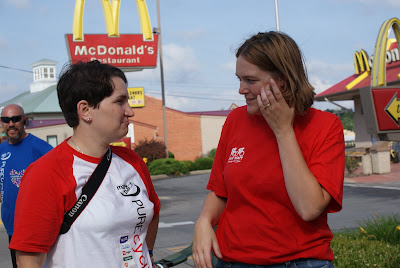 Then on to this guy.. Matjaz..from Slovenia.

He was the crew chief for Jure Robic for the past 8 years. This year he came back as a race official. Jure died last fall training for a mountain bike race. He hit a car at approx 50mph on a mountain road in Slovenia. He was a great athelete. He will always be missed. I had made contact with Matjaz before the race and he had planned on showering and maybe getting some sleep at our house but when the time came he was given orders to chase down a rider and make sure they were not cheating..hmmm. So he stopped for gas and a hug and went on. We will see him next year and will chat on facebook when the time zones line up. 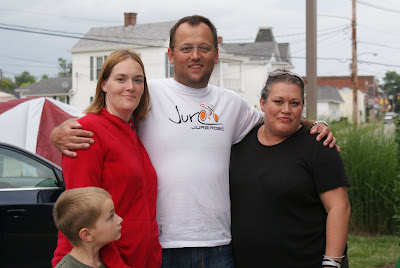 And here is Marko from Slovenia riding through. He was very good friends with Jure and had actually spoke with him the morning Jure died. 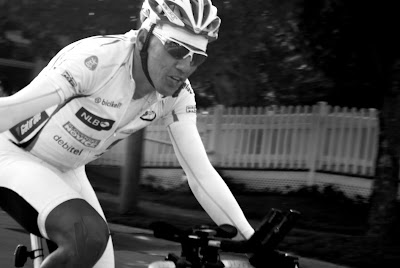 Marko's wonderful crew running along exchanging water bottles and giving him a pat on the back. Now it's time for cookies. 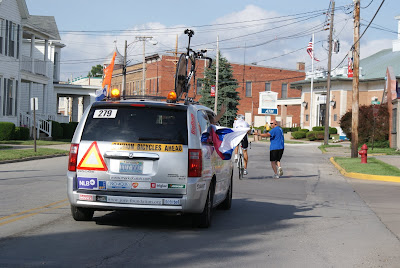 Gerhard's crew was funny. Everytime I looked up he had his camera on me. I told him in a very stern voice they must edit me out. I haven't seen myself anywhere yet.. 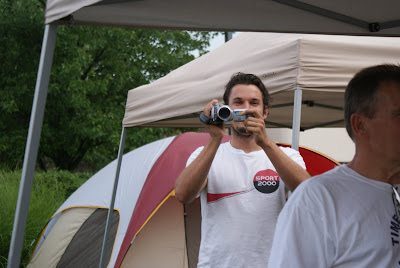 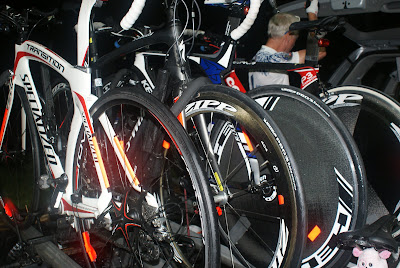 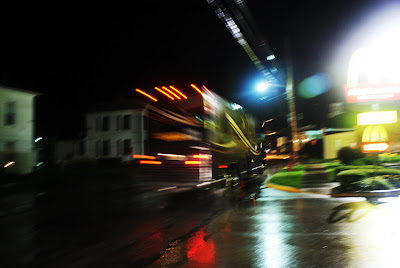 This rider carried his daughter stuffed animal with him. 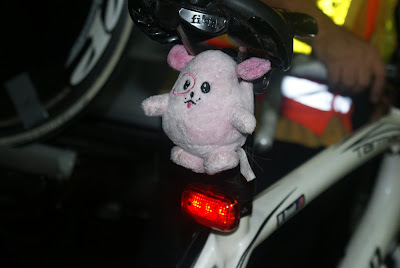 And off.. to ride through the night. 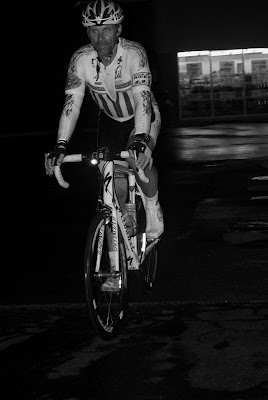 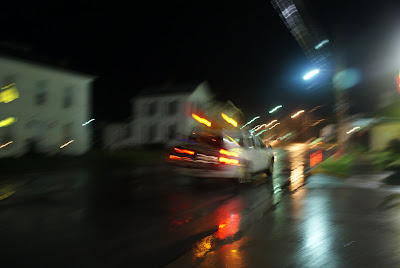 Thanks for visiting and look for part 3 to come in the next few weeks.

If you want to get involved in RAAM in your area please check out their website. www.raceacrossamerica.org. or send me a message and I will find someone for you to contact. astheworldflops at yahoo dot com